American Science and Surplus – What a Cool Store!

Home•American Science and Surplus – What a Cool Store!

American Science and Surplus – What a Cool Store! 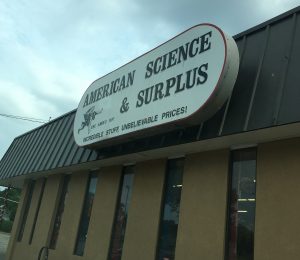 Recently Sallie and I took a trip to Milwaukee.  It was work related, but we had time to do some other things.  We stopped at a Radio Shack to look for stepper motors for the Robot Camp in July.  They didn’t have stepper motors, but one of the employees there suggested trying “American Science and Surplus.”  Ok, it seemed worth checking out.

American Science and Surplus is Cool!

The Milwaukee location of American Science and Surplus was only about 15 minutes away and, according to their website, they were open until 7 PM. We drove, parked, and went inside.  Then we saw all the cool gadgets, gizmos, and stuff.  At that moment, the curious little boy, the mad scientist, and the creative inventor in me all come out at once!  Again and again, some device caught my eye and made me wonder “What could I make with this?” and then some contraption would come to mind.

We came in for a motor and there were plenty to choose from.  They didn’t have the stepper motors I was looking for, but they had AC and DC motors of various sizes.  I bought two smaller ones to try out.  They also had some linear actuators which come in handy for moving things.  (I made a desk that raises and lowers using a couple of linear actuators.) 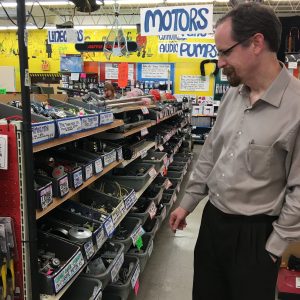 What kind of science are you interested in?  American Science and Surplus has some electronics and electro-mechanical devices.  If you have a kid interested in electronics (or maybe you are a kid or a kid at heart!) Snap Circuits is a great way to learn, and they have a variety.  They also have plenty of chemistry supplies, microscopes, other optics, and earth science and other kits.

They don’t have just science supplies, but other things that might interest the average geek.  There are the “Bobbleship Enterprise” and Star Wars kaleidoscopes, for example.

Not everything at American Science and Surplus is strictly what I would call “science” related.  Some of it is just surplus.  From military supplies to mini bottles of hotel shampoo, it’s perhaps a little difficult to see the science connection, but that’s OK, I’m sure some people will find those things useful.  Who knows, maybe the military winter camo poncho is a science experiment just waiting to happen, or maybe you need to wear a winter camo poncho while conducting your next science experiment . . . in a snowstorm.  All you need is a little creativity!