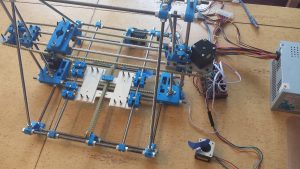 Now it’s time for the DIY 3D printer belts, motors, extruder, and electronics.  With those parts connected we finally get to see it move by itself. Very exciting!

The motors were easy to attach to the printer.  The mounting brackets were easy to get to and bolting the motors went smoothly.  Adding the belts provided some challenges.  Some of the gears worked well with the belt, but others didn’t match up and the belt would slip.  The printer didn’t work yet, so I couldn’t just print a different one.  I had to modify the gears I had to fit the belt.  Using my Dremel, I was able to reshape the gears so they would work better.  Printing new gears would be a high priority once the printer started working.

After using the printer I eventually had another problem with the belts.  I bought belts that were intended for precision timing applications, which is what I needed, but the belts had a backing made with a fine metal cable.  With the tight turns around some of the pulleys, the metal was bent back and forth and started to break.  The belts began to stretch and became useless.  For the X and Y axes, I switched to the 6mm GT2 belt for my DIY 3D printer belts and metal pulleys on the motors.  This has worked much better. 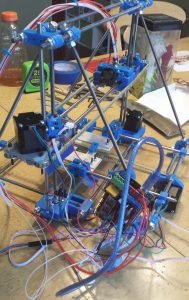 The electronics are made up of an Arduino Mega 2560 and a RAMPS board.  The Arduino is a microcontroller on a board designed for the hobbyist to use.  The RAMPS board was made to attach to the Arduino and provides the electronics needed to connect the Arduino to the motors, heaters, and other things needed for a 3D printer.  This combination is one of the cheapest ways to go with 3D printer electronics, but it has been around for several years and has proven to be reliable.

The printer is powered by a PC power supply I had laying around.  Not all PC power supplies will work.  They need to be able to supply enough current at 12V to run the printer, especially if you have a heated bed.  The power supply I have is rated for 16 amps at 12V and that has worked well for me.

After hooking up all the motors and the power supply to the electronics, I uploaded a small test program to the Arduino to test the motors.  It all worked!  It was very cool to see things moving.  As you can see in the picture, the wires aren’t very organized.  I was going for the “impressively chaotic” look! 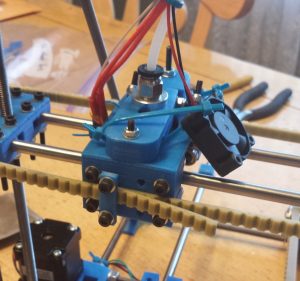 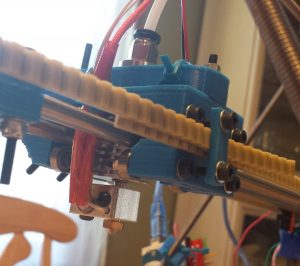 Then it was time for the “printhead” – the hot end of the extruder. The plastic is pushed through a Teflon tube in the top of the extruder, then through some cooling fins that keep the top part from melting the plastic too soon.  At the bottom of the extruder, there is a rectangular metal block.  There is a heating cartridge in the block that can get as hot as 250 degrees Celsius.  There is also a thermistor that tells the microcontroller the temperature of the block at any given moment.  The microcontroller can turn the heating cartridge on and off to keep the temperature exactly where it needs to be.

At the bottom of the block is a small brass nozzle.  The motors move the extruder and this nozzle around the print area as plastic is pushed out and placed where we want it to go.  At least that’s what we want to happen!