I added the heated bed and connected the cold end of the extruder which is a stepper motor with some gears designed to push the plastic filament through a Teflon tube into the hot end of the extruder that is mounted on the X-axis.  I am almost ready for my DIY 3D printer first print.  First, there were a few more obstacles to overcome. 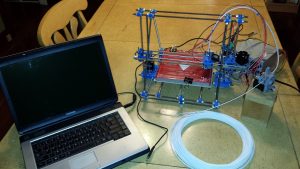 Much of the “calibrating” was just calculating.  I needed to figure out how many steps to move each motor to move each axis exactly 1 mm.  This can be calculated using the number of steps per rotation of the motor, the spacing of the teeth on the belt, and the number of teeth on the pulleys.  These calculations get entered as settings in the firmware that is uploaded to the Arduino on the printer.

The exception is the motor that pushes the plastic.  It is easier to enter a reasonable guess and then run a test.  In this test you tell the motor to push a certain length of plastic, measure how much was pushed and then compare that with what you expected. That should give you what you need to calculate a more accurate number.  This is hard to get exactly right because the hardness of the plastic and the back pressure on the plastic when printing can change this slightly.

Not wanting to get too complicated, I picked a simple 2cm x 2cm x 1cm box for my DIY 3D printer first print.

The first try didn’t work.  Neither did the second, third, or several others.  The first few layers worked, but after that, the motors were moving, but no plastic was coming out.  I finally figured out that the top part of the extruder with the cooling fins wasn’t cooling down enough.  The plastic was getting too hot in that top part and it was getting soft and getting stuck.  I had to mount the fan a little better so the air would reach more of the cooling fins.

Here is my first plastic “print”.

The box isn’t exactly the size it should be.  It’s a little short.  I found that the Z-axis assembly was hard to move and was causing the stepper motor to skip steps.  I loosened it a little and it started to move more freely.  Also, the plastic wasn’t feeding as quickly as it should.  I had to make some adjustment and also change the part that pushes the plastic so it grips the plastic better because it was slipping.

For the most part, the plastic is in the general shape I was expecting so I think I can say I have a 3d printer!  Even with the problems, it is exciting to see it working!