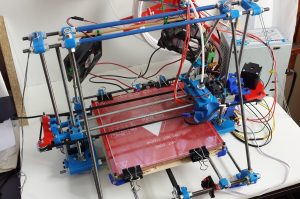 Yes, call me a geek! (I accept the title willingly.)  And just like many other geeks, 3D printing has intrigued me for a few years now.  Until recently, it was only something I read and thought about.  That changed when a friend gave me a collection of plastic parts for building a DIY 3D printer of my own.  (DIY stands for “Do It Yourself”.) At that point, I committed myself to see it through to the end.  I had to build it!  Wouldn’t you agree?

You can read about my successes and struggles in this series of articles.  While this is not a step-by-step guide to building a printer, it will help you understand the process.

As I mentioned, a friend gave me the plastic parts for a 3D printer.  This may sound strange.  Why didn’t he give me all the parts?  It will help to know that this printer is a RepRap (http://reprap.org) style of printer.  That means a couple of things.

The plastic pieces that I received were for a printer called a Mini-Mendel.  Huxley is another name for it.  Here are some links about it. 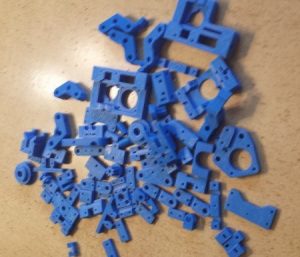 The plastic parts for my printer. It doesn’t look much like a 3D printer . . . yet.

It all started when the box came in the mail with dozens of little plastic parts.  I dumped them out on the table and it looked like just a lot of random pieces of plastic.  How was this going to turn into a 3D printer?  It was confusing at first, but after finding a couple of helpful websites and seeing what others had done, it started to make sense.

What was the next step?  The plastic just holds other parts of the printer together.  So the next step was to get the other parts.  I started with parts for the frame, but more about that in the next post.

RepRap is a Do-It-Yourself kind of project.  You have a general pattern to follow, but you often have to figure out the details.  Depending on the PepRap printer, the instructions on the internet aren’t always as helpful as they could be.  That made this an interesting and challenging project.  I learned a lot along the way.